If you are shopping for a shaving brush then you will have likely read they are made using badger hair. Actually, there are 3 animals that are frequently used for hair in the cosmetics and beauty industries; horse, badger and boar. Badger’s hair is by far the most common for shaving brushes, though.

You might now be wondering, are badgers killed for shaving brushes? Sadly, the answer is yes.

PETA released some terrible footage of badger farms in China in late 2018. This confirmed what longstanding suspicions and anecdotal reports from inside the badger industry had referenced. Badgers were being kept in awful conditions, were abused and malnourished.

People for the Ethical Treatment of Animals, or PETA, are animal rights activists that managed to gain inside footage of a typical Chinese badger farm in 2018. Badgers, like many other animals used in the cosmetic industry, are generally farmed in China. The hair is removed from the badgers and is exported for manufacture in badger hair shaving brushes. Badgers are considered disposable for the badger hair trade and once some are hairless or too ill or malnourished to grow more hair, they are discarded. It is an unethical and unsustainable practice. Not only is the process of removing the hair painful, especially from the loins and underside of the belly, but badgers are kept in awful conditions whilst they’re being farmed.

Prior to the PETA video being released, there had already been a longstanding suspicion of malpractice in the badger hair industry. The PETA video, however, engaged public conversation around the topic and galvanised top companies to take action themselves.

Procter & Gamble, a multinational pharmaceutical and cosmetics company were amongst the first to take action. They claimed they immediately ceased to use badger hair in their shaving products.

Sadly, whilst some companies released statements and pledged to take action, it is unlikely whether they all followed through with their claims to stop using badger hair. To this day, it remains the primary hair used in badger hair shaving brushes.

Why Are Badgers Killed for Shaving Brushes?

Why badger hair? It’s deemed to have the right amount of softness and stiffness, as well as a good length for shaving brushes. There are different grades of badger hair for different types of brushes and some can cost hundreds of pounds! The hair is mostly taken from the stomach area but can be taken from the legs or back also depending on the grade of the brush. No matter where the hair is taken from, it’s harmful to the badger.

To get the amount of hair needed to fuel the world’s need for badger hair shaving brushes, badgers are farmed and killed for hair in droves. Badgers are a wild animal and thus, they haven’t been bred for thousands of years to be domesticated, like sheep. This means they are not easily shorn for their hair, they will struggle and since hair is taken from sensitive areas, it’s not possible to remove it without pain (like it is with sheep).

Instead, they are often simply killed and then their hair is collected. Other badgers may struggle as the hair is cut from them, possibly sustaining injury during the process. Injured badgers won’t be rehabilitated and will be likely killed instead. Most badger farms are located in China where regulations are generally poor for the health, safety and rights of animals.

Badgers aren’t a farm animal. The suffering and death caused by the badger hair industry is completely unnecessary.

Thankfully, there is an alternative! The archaic days of the badger-hair shaving brush are behind us. We are not living in medieval times anymore!

You can now get synthetic shaving brushes that are cruelty-free and vegan. While some purists swear by badger hair, many people are unwilling to stomach that much cruelty and vegans will not use products with animal hair. Even purists are turning to synthetic brushes. They’re durable, strong and best badger hair in many areas of performance. After all, this is the 21st century, why do we need to use animal fibres anymore

Put simply, people are quickly running out of excuses to use badger hair. The industry is well-exposed as cruel and synthetic alternatives are just as good and they undoubtedly last longer. Of course, we welcome this news and we hope you do too! Say ‘no’ to the badger hair trade with a vegan shaving brush.

We have two different vegan shaving brushes. Both are 100% cruelty-free and vegan – one has a beautiful wooden handle, the other is plastic in a classic black finish. 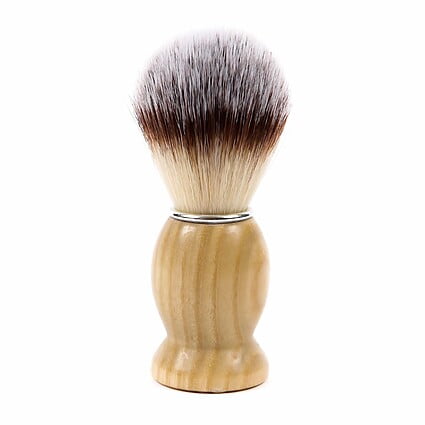 Have you been meaning to give traditional shaving a try, but couldn’t find the right tools?

Our shaving brushes are

We use cookies on our site to personalise content and ads, provide social media features, and analyse our traffic.
More info Accept